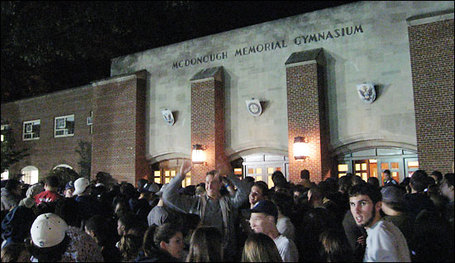 Great recap of Georgetown's Midnight Madness from the Hoya Hoop Club folks on their blog.  Includes pictures of of smiling, dancing, happiness and cotton candy.

Odd story of the night goes to the moron who stole a handgun from a Park Police officer and discharged one round in the bathroom.  More coverage from The Voice.

Hoyaballa has an interview with recruit Tyrone Johnson about his thoughts on Georgetown after attending the festivities.  Johnson is a two-sport athlete, ala Allen Iverson.  Excerpt of the interview is below:

Hoyaballa was able to catch up with 2 sport star Tyrone Johnson this weekend. Unfortunately for Tyrone he injured his knee during the football season and is likely done playing football the rest of the season. However, this injury did not deter young Tyrone from being able to come down to Georgetown's Midnight Madness and it sure was worth it for the youngster from Plainfield, NJ. "I was able to get down there by 11 (pm) so i missed some of it but still got to experience it." Tyrone stated that current GTOWN sophomores Jason Clark and Henry Sims were his gracious hosts but that by the end of the night he was hanging out with all the players. Tyrone also specifically mentioned Rakeem Christmas' name as another attendee who he was able to talk with and hang out with. When asked to describe the overall experience Tyrone said, "It was great. The environment is really exciting and the fans really love the players." It seemed the Hoya faithful did a good job of showing Tyrone and the other recruits how much the student body truly support their student athletes.