The Wait is Over: Midnight Madness Arrives at Georgetown

Share All sharing options for: The Wait is Over: Midnight Madness Arrives at Georgetown

Get your ass to McDonough. 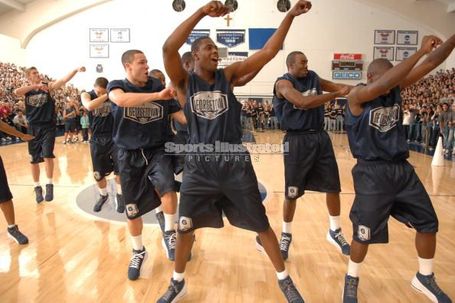 via cache4.asset-cache.net
My first Madness at Georgetown was in 1995, which may have been the first Madness in Georgetown's history.  For us freshmen on campus it was our first glimpse at the entire squad outside of random individual appearances at pick-up games at Yates or standing behind them in line to use the bathroom in the ICC.  It was our first chance to see the team that for many of us, was the reason we decided to attend Georgetown to begin with.

Before the Hoyas' magical run to the Final Four in 2006, 1995 represented our last real chance at glory, and the experience of Midnight Madness stayed with us all season.  In fact, I can still remember it clearly as I write this, and that says a lot given all the stuff I have decided to wreck my body and mind with since then.  It was exciting to be at McDonough for which many of us was the first time, especially so late at night when it seemed like it was against the rules.  It was standing room only, and after the gimmick 'you can tryout to be a walk-on!' was over (which was great since we all started cheering for this one obese kid who couldn't run but couldn't miss from behind the arc), the players, led by Allen Iverson, Othella Harrington, Jerome Williams, Jahidi White, Boubacar Aw, and the legendary Victor Page came out to that Mariah Carey and ODB song as the lights went out in McDonough and put on an epic dunking display much to the delight of the students who expected nothing less.  The momentum of Madness carried over into the season as that rush that we all experienced as students that night was the reason we thought it was a good idea to drink a bunch of Natty Ice before boarding a school bus to Landover, Maryland.

More after 'The Jump':

The Hoyas that year went on to vanquish foes ranging from the Croation national team, Colgate, Georgia Tech, Memphis, and the rest of the Big East (yes, even Donovan McNabb played some point guard for 'Cuse that year) before losing an epic Big East Tourney final to UConn on the Ray Allen fluke and eventually losing to Coach Cal's group of cheaters at UMass in the Elite Eight of The Dance.

Before the Hoyas' magical run to the Final Four in 2006, 1995 represented our last legitimate chance at glory, and for us freshman Midnight Madness started it all.  Now Midnight Madness has become a tradition at Georgetown, and the University smartly uses the event as a springboard to seduce recruits.  Indeed, it is alleged that after seeing Patrick Ewing, Jr. teach Jerry Rice the Soulja Boy dance (below), Greg Monroe told Duke to shove it and started seeking out the more casual apartments in Copley.  Indeed, tonight takes on a similar importance, as in front of a national audience on ESPNU, the Hoyas will be hosting prized recruit Rakeem Christmas among others.

But the best part of Madness is that it truly marks one of the only times where the team is allowed to celebrate with the students before the season starts.  Members of the team are encouraged to show off their best dance moves (mostly to disastrous and hilarious results), and even JT3 gets in on it.

So for students who still are lucky enough to live on campus and experience the awesome optimism that comes with the dawning of each college hoops season, get your ass to McDonough.  This is your chance to let the players know in October how loud you'll be for them when the games start to really matter in late December through March and hopefully April.  This is your chance to show the nation watching on ESPNU that even after a disappointing season, Georgetown is back.  Georgetown matters.

Get your ass to McDonough.