The Sky is Falling - Part One: Youth

Share All sharing options for: The Sky is Falling - Part One: Youth

I think this is the perfect opportunity to mention to those new to the website or that have not already figured it out, that my blogging name is a joke. A very bad joke since the Georgetown season has now dropped to the point where people actually think I am serious when I say Hire Esherick. But to all of those who are running to the bunkers and stocking up on canned tomatoes and powdered milk to survive the nuclear winter that is now Georgetown basketball, I offer the following: This season has been a major disappointment and we have played poorly, but why were we expecting anything different?

After our loss at home to Cincinnati, which was our sixth loss in seven games, our first overtime loss in four years and our first overtime loss at home since 2003, I mentioned that all programs go through slumps. I tried to rationalize that teams that have as much attrition as we had last season take time to rebuild the program. I am going to expand on this a little further. And I know there are plenty of ways to debate, refute and argue what I am about to propose, so I welcome all the naysayers. And I also accept that this year has been particularly hard by the seemingly careless, selfish and lackadaisical play by some of our supposed leaders. And for those who know me, I am always the last to drink the Kool-Aid and always see the downside in everything so maybe I am on to something here...

Youth
Much has been said about the lack of experience of the Georgetown team. We have 2 upperclassmen on scholarship, a starting lineup that consists of 1 senior, 1 junior, 2 sophomores (one of whom missed 18 games last year due to injury) and 1 freshman, and a bench that consists of 2 sophomores (one red-shirted last year), 2 freshman and 1 transfer. Before the match against Louisville, Barker Davis of the Washington Times wrote:

According to basketball analyst Ken Pomeroy, Georgetown's roster ranks 314th among 344 Division I programs and 14th in the Big East with an average of 1.12 years of experience. Given that Pomeroy credits Mescheriakov with a season of experience, Wright with a season (though he was injured throughout league play in his freshman campaign), and seldom-used walk-on Bryon Jansen with a season, Georgetown is even younger than 1.12 years suggest.

Youth equals energy which equals more late game spurts and wins right? Let's take a look at the last four NCAA Tournament Champions, and the experience of their starting squads and benches. To add transparency to my madness I'll set forth the following definitions:

Starting Team - players ranked in the top five in minutes per game for the season
Bench - players not included in the starting team that average ten or more minutes per game
Contributor - player that averages 10 or more minutes a game
Experience - 3 years for seniors, 2 years for juniors, 1 year for sophomores and 0 years for freshman
Age Classification - as listed on roster, regardless of injury, transfer or red-shirt status
(Note: Not the same as Pomeroy calculations) 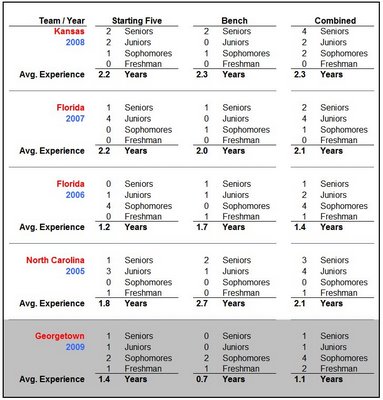 Before you say it, I'll try and address the comment first. Yes, there is a difference between the current Georgetown team and a national champion. So below is the same analysis applied to Big East Tournament Champions of the past four years. 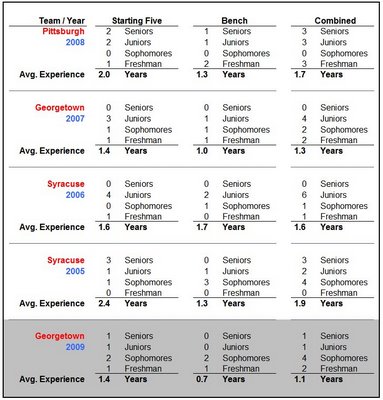 So we are young. Very young by champion standards. Equate that downwards and maybe we are right about where we should be in the standings. Now add on the fact that JT3 runs an incredibly complicated offense; an offense so complicated that Pete Carril, the coach attributed to creating the offensive scheme, had trouble teaching it to NBA players when he was an assistant coach at Sacramento. Don't forget about losing three senior contributors from last season. And oh yeah, we played one of the toughest schedules in the country. What were we really expecting?

The Sky is Falling - Part Two - to come later in the week.